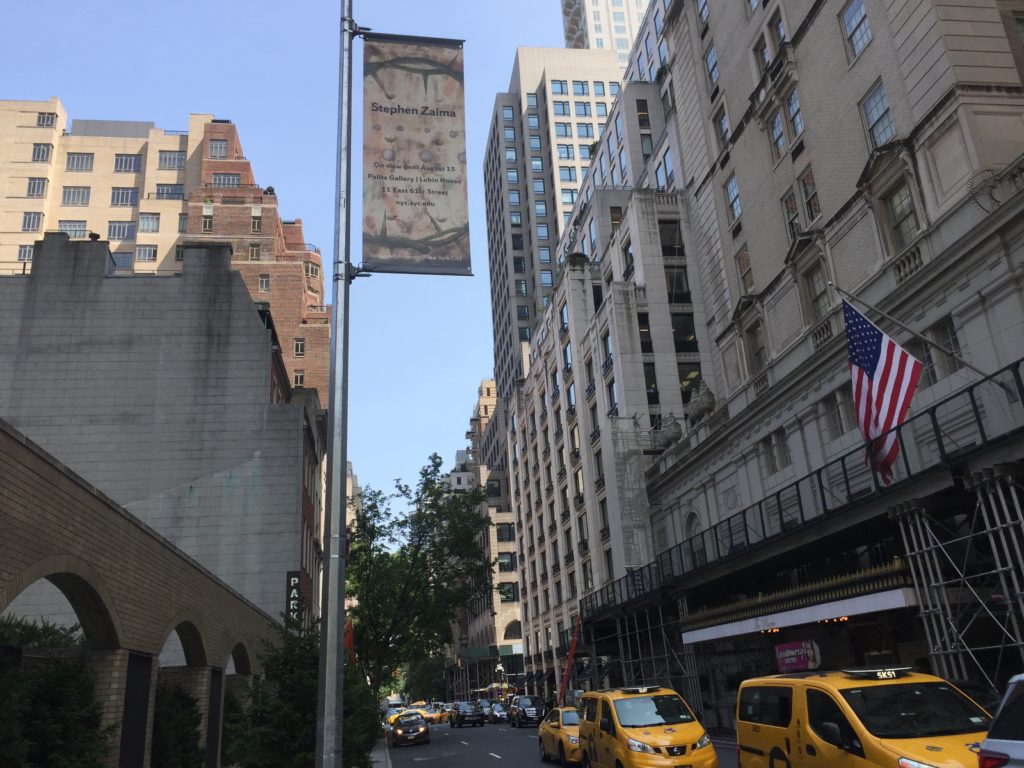 25th Anniversary of the Fall Of The Berlin Wall installation at Syracuse University home, Florence, and Strasbourg campuses. 2014 photo composite on translucent fabric 48″ x 144″ Stephen Zaima, the wall, 2014 The image is the specular duplication of a … Continue reading →

“Stephen Zaima’s paintings are dominated by a stylized image of Christ’s crown of thorns – there is no irony in this – just hope and memory. These paintings with their lovingly painted fields of sensuous color and iconography of paint wed the sacred to the profane. This marriage of the ecstatic imagery of Christianity and the materiality of modernism hold out not only the promise of transcendence and pleasure, but also reflects upon the human condition and art’s humanist and expressive value. By collapsing the imagery of the Baroque and that of high modernism, Zaima produces paintings that are a compressed history of human consciousness in which the promise of emancipation is forever defined by sacrifice, pain, transcendence, and deferred pleasure.”

“A writer says almost everything in order to be understood; painting builds a kind of mysterious bridge between the soul of the characters and that of the spectator.”  – Eugene Delacroix, October. 8, 1822

The ‘mysterious bridge’ that Delacroix describes is not one that need be traversed with hesitancy. In the best of cases, the bridge built by the artist should be approached with deliberate curiosity, and if successfully erected, it can be crossed an unending number of times.
Mysterious may not be an obvious descriptor one would use in characterizing Stephen Zaima’s works upon first glance.  It would run contrary to the emphatic nature of his iconography, his palette, and often, the scale of the work.  However, when trying to deconstruct a narrative in each painting, photograph, collage or installation, it’s never quite as there-for-the-taking as might be initially assumed.
The spare components that comprise the monumental L’evitare, 2000 (the most seemingly narrative in the exhibition), suggest an easy interpretation, but baked into the work are numerous subtle, right-turn decisions made along the way – the profound use of negative space; the textural treatment of the underbrush obscured by the main event; the object-ness created by the hanging mechanism – and it is these decisions laid bare that allow for infinite pleasurable attempts at deconstructing the painting for any active viewer.
As seen in the works in this exhibition, Zaima’s symbols and iconography recur throughout his oeuvre at varying intervals and across several media. Immediate examples seen in A Real Allegory, 1990, Corona del Spina, 1997, and Anvil,1998, include the harpsichord, the airplane, the anvil, the dividing line, varying spiral forms, and the crown of thorns. The relationships between these icons and the manner in which they’re created involve no accidents. Personal and art historical anecdotes intertwine, previously visible imagery is obscured, and compositions oscillate between the Rorschachian and the linear.
Stephen Zaima does not spoon-feed narratives, nor does he fall into the contemporary trap of thoughtlessly amalgamating imagery into some ambiguous moat. In his work he captivates, he challenges, he provokes contemplation, and by so doing we fortunately engaged enjoy every ramble over the bridge.

Artists are frequently asked about their favorite painting or their favorite artist.  This impossible but fair question seeks some insight about what drives you, where to place you or how to see your art.  Even though there is no right or wrong answer, finally placing your bet becomes an art history roulette from Fra Angelico to Jannis Kounellis.  As my website open with a photo of the Roman Forum behind me, I look forward on the shoulders of giants.

My answer has been different over the years, and I may at times have had a public as well as a private answer.  For many years I’ve admired a particular painting by Goya, who has been described as the last of the old masters and the first of the moderns.  If asked, I would have to say that Goya’s 1798 Flying Witches is my favorite painting, while acknowledging that the intensity and power of the images in this small painting, executed with an unflinching eye, is something I strive to achieve in my own work.